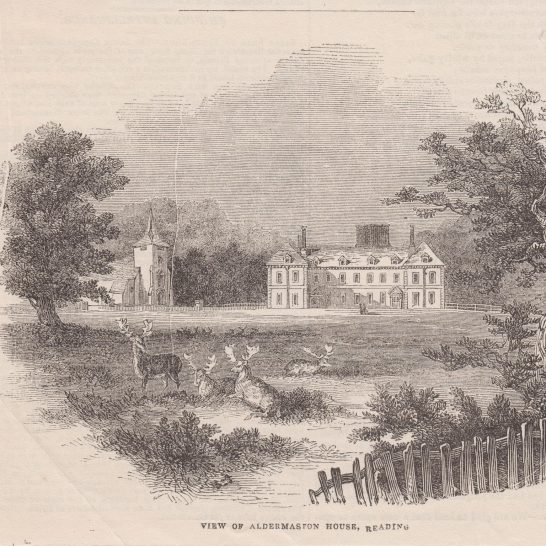 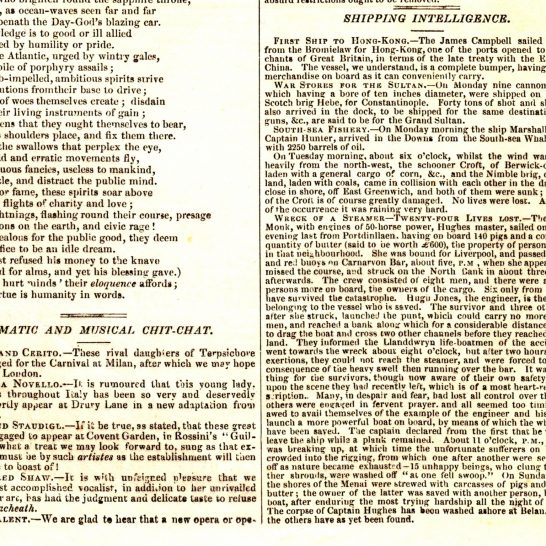 This newspaper cutting of a picture of Aldermaston Court was obtained via eBay. The reverse of the cutting shows newspaper columns with various articles and notices. In particular, an announcement for Clara Novello’s appearance at Drury Lane, it reads …

CLARA NOVELLO – It is rumoured that this young lady, whose success throughout Italy has been so very and deservedly great, will shortly appear at Drury Lane in a new adaptation from the Continent.

Clara Anastasia Novello (10 June 1818 – 12 March 1908) was an acclaimed soprano, the fourth daughter of Vincent Novello, a musician and music publisher, and his wife, Mary Sabilla Hehl. Her acclaimed soprano and pure style made her one of the greatest vocalists, alike in opera, oratorio and on the concert stage, from 1833 onwards. In 1843 she married Count Gigliucci, and retired in 1861.
…. In 1839, she once more made a concert tour, travelling down the Rhine to Düsseldorf, through North Germany to Berlin, and thence to St. Petersburg. Her first appearance on the stage was at Padua in Rossini’s Semiramide, on 6 July 1841. Unqualified successes in Rome, Genoa, and other large Italian cities followed; Rossini sent specially for her to take the soprano part in his just completed Stabat Mater. Owing to the mismanagement of agents, she was announced to sing at two places – at Rome and Genoa – during the carnival of 1843; the Roman authorities refused a permit to leave the territory and detained her under arrest at Fermo. On her appealing as a British subject to Lord Aberdeen, then English foreign secretary, the matter was arranged by arbitration. Count Gigliucci, the governor of Fermo, fell in love with his prisoner; she agreed to marry him as soon as professional engagements permitted. At Novello’s last appearance in Rome she was recalled twenty-nine times; there was some disturbance at Genoa. In March she returned to England, and appeared in English opera at Drury Lane; also in Handel’s Acis and Galatea, and at the Sacred Harmonic Society and other concerts. On 22 November, she was married to Count Gigliucci at Paddington parish church, and retired with him to Italy.

CONCLUSION: This cutting is probably an announced of the fire on January 13th, 1843 because the reverse is publicising the appearance of Clara Novello at Drury Lane which occurred in the March of 1843.