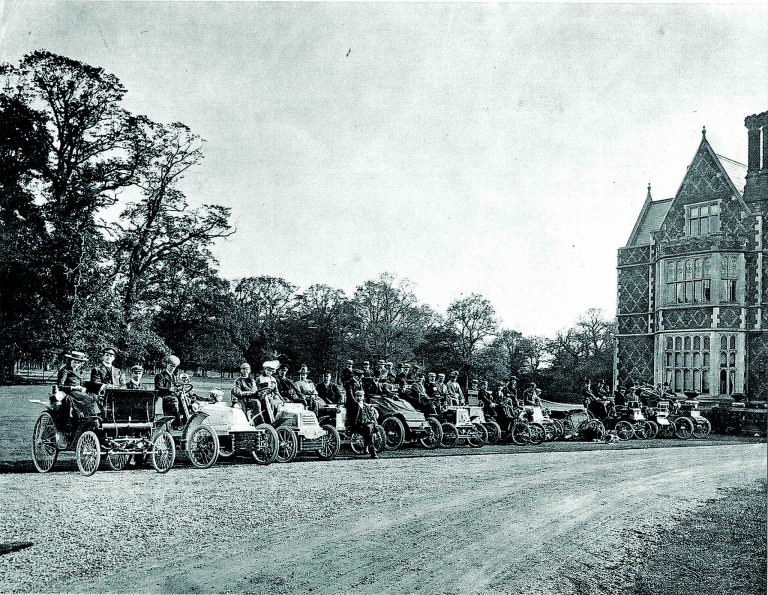 zoom
A splendid gathering of early 20th Century motorists with their horseless carriages. In 1896 the law requiring someone to walk ahead with a red flag was repealed and the speed limit raised to a dizzy 12 mph. Not a number plate to be seen- registration was introduced from January 1904. Mr Collins has identified most of the vehicles as follows, from left to right: 1- The first vehicle is a Benz from 1898/99 - the world's very first production motorcar, boasting 2 3/4 horsepower. 2- Possibly a De Dion Bouton of 1901/02; 3- This could be a Darracq of about 1900/01; 4- The front is obscured by the gentleman sitting on it.; 5- Possibly a Leon Bollee or its UK license-built Coventry Motette; 6- A Panhard Levassor of around 1899; 7- Possibly another Panhard Levassor, of about the same age; 8- Possibly a Stirling or a Panhard Dogcart of about 1898/99; 9- Probably another Panhard Levassor from around 1899; 10- A motor tricycle, probably a De Dion Bouton, Ariel or Components from around 1898/99. Many tricycles used De Dion Bouton engines; 11- A Benz from around 1898; 12- A rear-engine De Dion Bouton of around 1898-1902; 13- details unclear.

A splendid gathering of early 20th Century motorists with their hornless carriages. Not a number plate to be seen- and did one of each party have to walk ahead with a red flag?