You are here: HomenextPeoplenextThe Lords of the Manor of Aldermaston

The Lords of the Manor of Aldermaston

Historically, right up till 1939 most of this country was owned by a small number of families. Here is a list of all the Aldermaston landowners from 1066 till 2019.

To magnify the images, please scroll down to where the image is repeated and click on them. 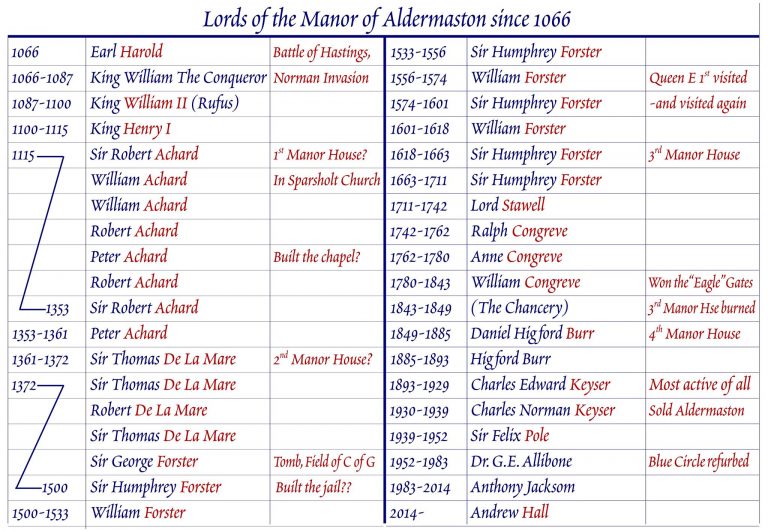 Easily the most influential of all was undoubtedly Charles Keyser (Lord from 1893 -1929) who largely created the Aldermaston we have today- some details are shown below. Others (Achard, Delamare, Forster and Higford Burr) built glorious Manor Houses and Sir George Forster was a prominent figure in King Henry VIII’s time; he built one of the most exquisite alabaster tombs in the whole country for himself and his wife, in Aldermaston’s church. Details of this tomb are to be found elsewhere on this website,  Tomb of Sir George Forster in Aldermaston Church

William Congreve (Lord from 1780-1843) won a pair of magnificent wrought iron gates from the Midgham Lord in a game.

Congreve transported them to Aldermaston and rebuilt a house to accommodate them- the gates and gatehouses are seen below on a snowy day. They’re now known as the Eagle Gates. 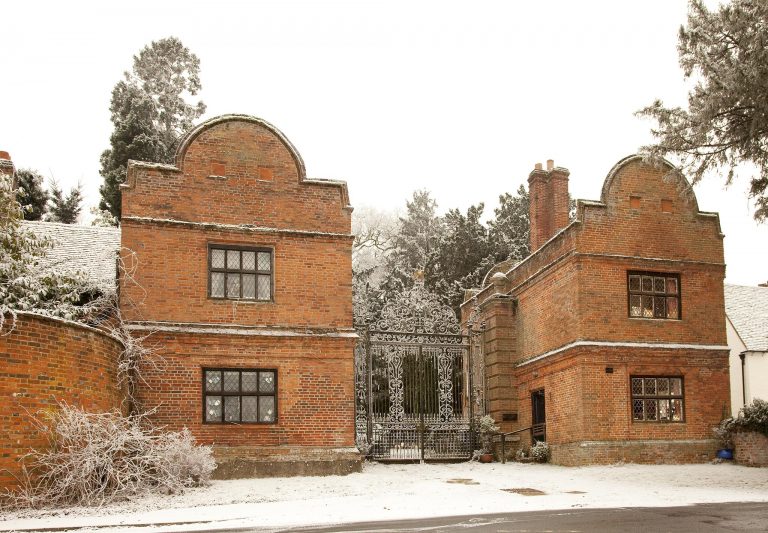 In fact, the bird mounted on top of the gates is actually a falcon- featured on the Congreve family crest. Nobody driving south through Aldermaston can miss these gates and below is the gilded creature in close-up. 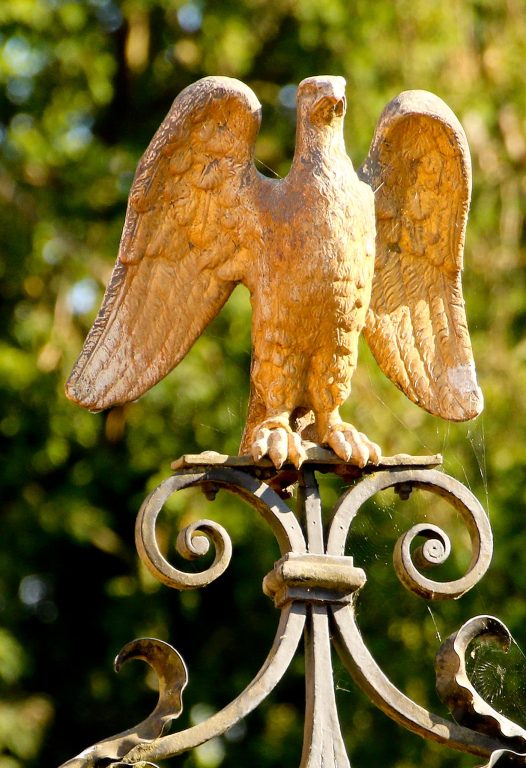 Sir Humphrey Forster (Lord from 1618-1663) built the 3rd Manor House and when this sadly burned down in 1846 Mr Daniel Higford Burr, spotting the surviving chimneys while passing, bought the estate in 1849 and built a new house incorporating many remaining features of the former house.

Higford Burr was a keen animal lover and had himself portrayed in the church as Adam naming the animals- a detail from the stained glass window on the north wall is shown here. He’s in the third panel from the top on the right hand side, with a cat around his shoulders! 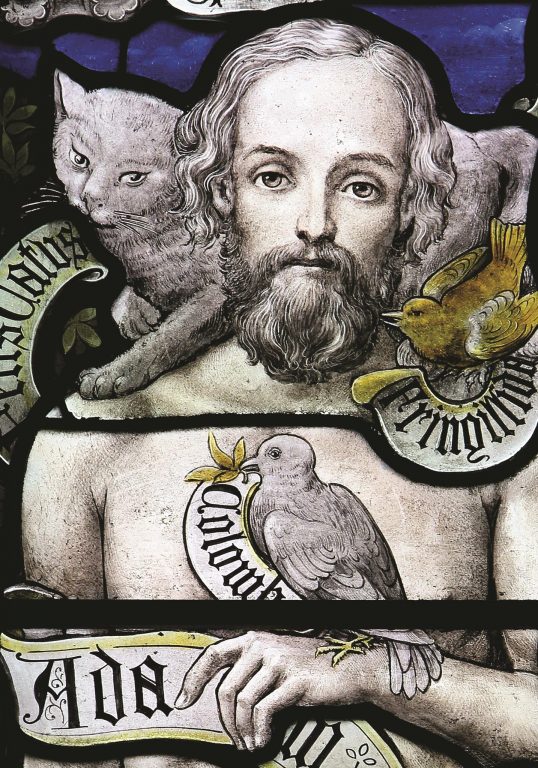 Daniel Higford Burr’s gravestone is to be found to the north of the church- with Charles Keyser’s family plot just behind and to the left in the next photo. 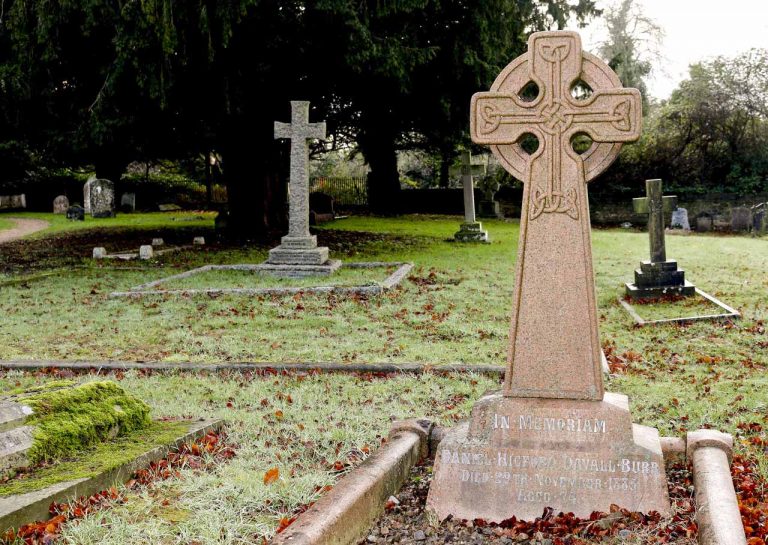 The next Lord of the Manor, Charles Edward Keyser contributed more to present-day Aldermaston than any other. Therefore, a great deal has been written about him so some brief comments will suffice here.

A successful stockbroker with an especial interest in church architecture, he purchased the estate in 1898 and devoted enormous efforts and resources to improving it- always with conservation foremost in his mind. Among many other good works, he redecorated the church, built the Parish Hall and provided the village both with water and sanitation (at least one privy still exists today but as a memorial only!)  During the First World War, he supported both enlisted soldiers and their families and a rudimentary health care was another of his contributions. He poses for the camera below in humorous and confident mood. 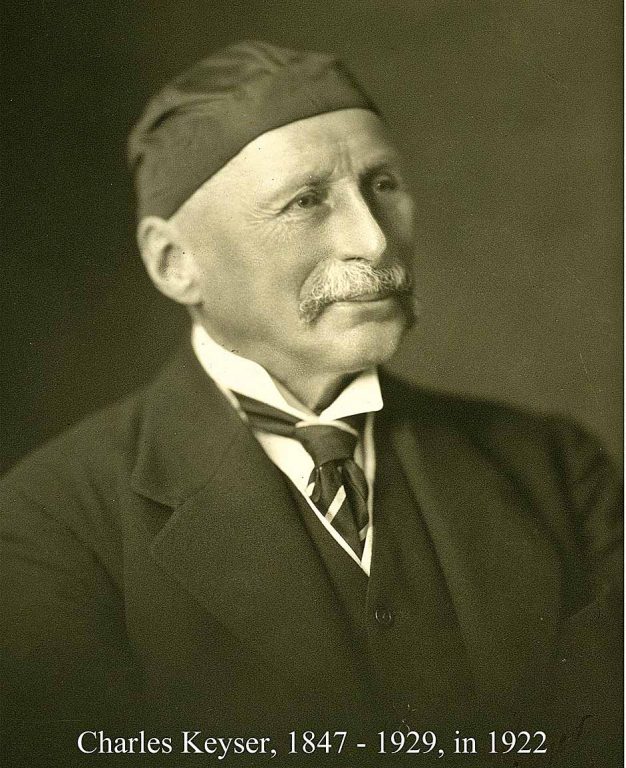 Like Higford-Burr, Charles Keyser had himself portrayed in the church, as a mural to the right of the altar. He is clearly recognisable below as a celestial harpist. 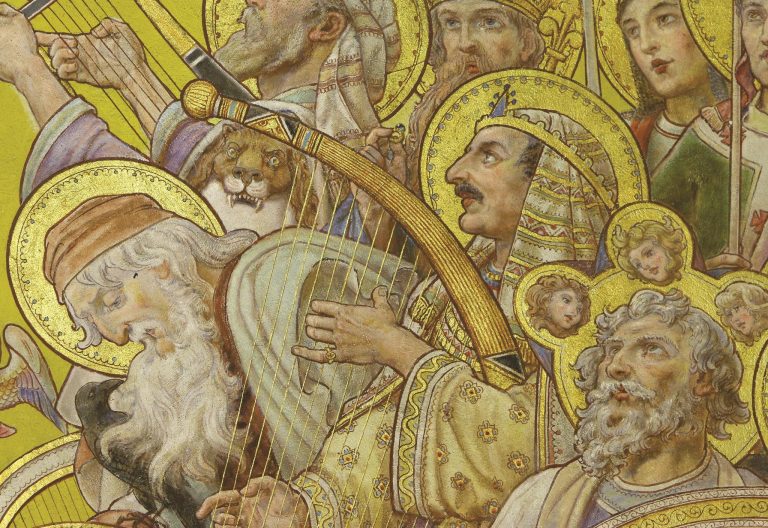 Some of the other faces may well be portraits of real individuals but nothing more is known. If so, the very prominent figure shown below must represent someone very important- it has been suggested that he may be Keyser’s father, also called Charles. 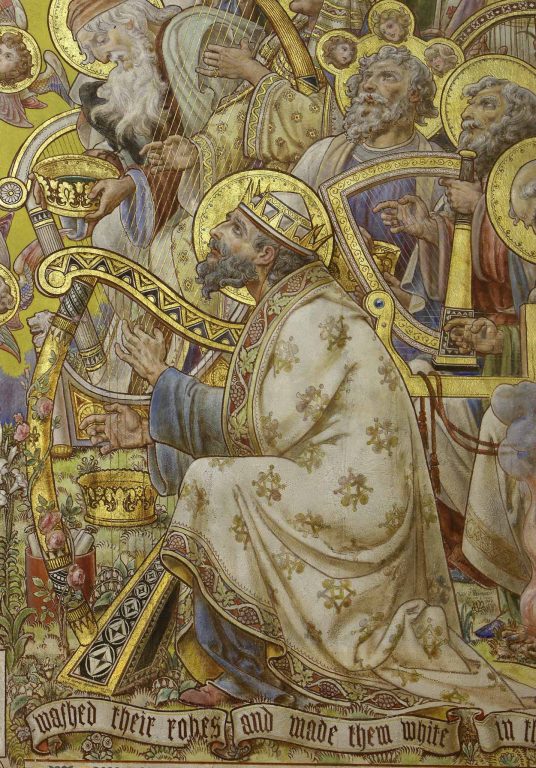 To the left of the altar, Charles Keyser’s family can be found. His wife Mary Emma plays the lute, his daughters Dorothy, Muriel and Sybil are angels just behind her- and his son Charles Norman is a cherub sitting beneath them. Norman succeeded his father in 1930 but sold the entire estate in 1939. Aldermaston Estate thus finally ceased to belong to one family and is now owned by many individuals. 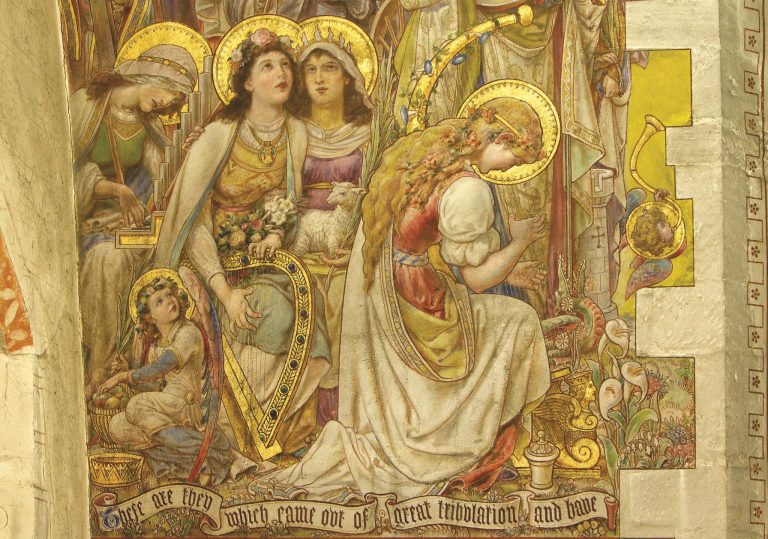 zoom
zoom
Lodge Houses, Aldermaston Court
zoom
zoom
zoom
zoom
Another atmospheric photo of Keyser in later life, in 1922.
zoom
During extensive restoration of the church in 1896-1902, Charles Keyser whimsically had himself portrayed as a harpist on the eastern wall to the right of the altar! This glorious mural; was executed by by Philip Newman.
zoom
zoom
On the other side of the alter, his family are portrayed- his wife Emma (playing the lyre) , daughters Dorothy, Muriel and Sybil and (bottom left) son Charles Norman Keyser