You are here: HomenextErasnextTudor 1485–1603nextTomb of Sir George Forster in Aldermaston Church

Sir George Forster (1470-1533) was the 17th Lord of the Manor of Aldermaston- and a prominent figure in his day. He was made a Knight of the Bath in 1517, Sheriff of Berkshire and Oxfordshire and was also one of Henry VIII’s bodyguards. When the time came, Sir George’s connections enabled him to commission before his death one of the very finest alabaster tombs in the entire country, comparable to (and probably crafted by) the same master stonemasons who fashioned a similar tomb in St George’s Chapel, Windsor. His wife Elizabeth died in 1526 and  is buried beside him. The second photo below, from directly above, is not one many people will have seen! The letters A,B and C refer to detailed photos which follow.

Sir George’s son, Sir Humphrey, was selected to represent the region at the famous meeting of the Field of the Cloth of Gold where King Henry VIII met King Francis I in France in 1520. 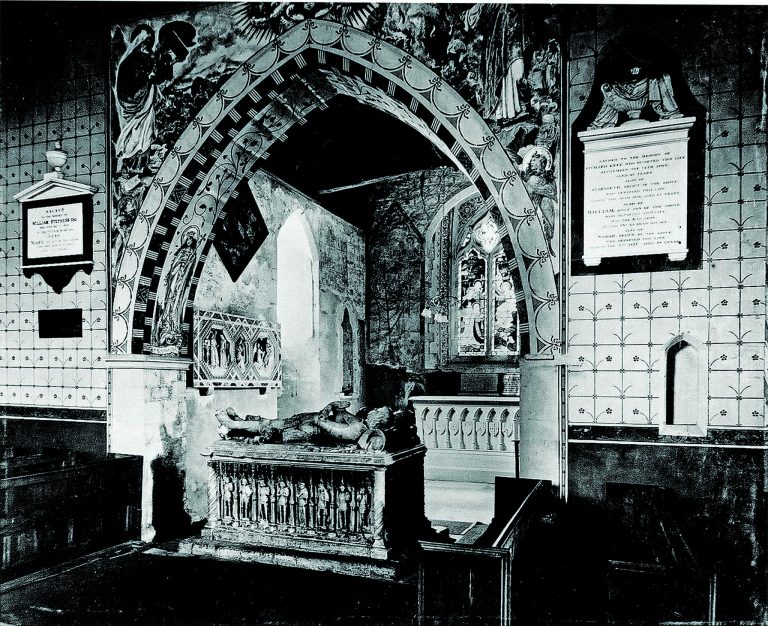 A view of the magnificent tomb, photographed in the early years of the 20th Century shortly after Charles Keyser’s refurbishment. 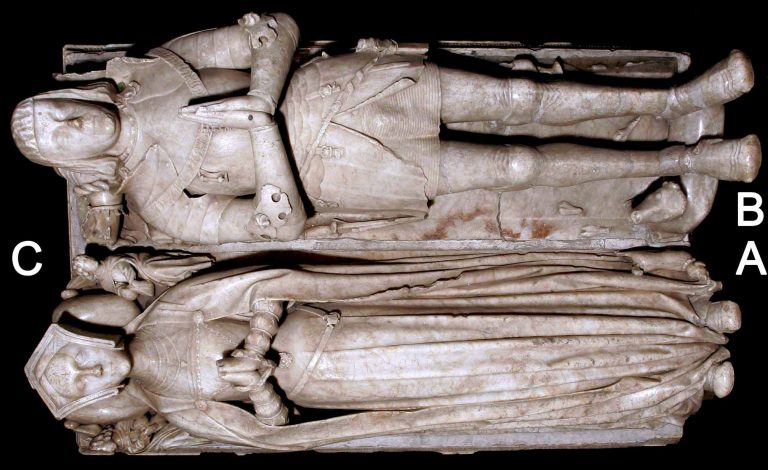 Below are the faces of Lady Elizabeth’s and Sir George’s effigies. Shockingly, graffiti have been carved on her face. 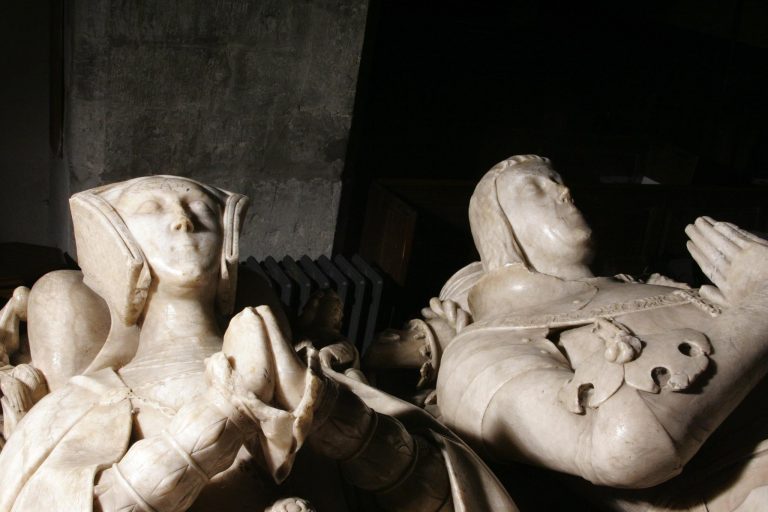 Below is “A” on the first photo: a dog tugs at Lady Elizabeth’s robe. 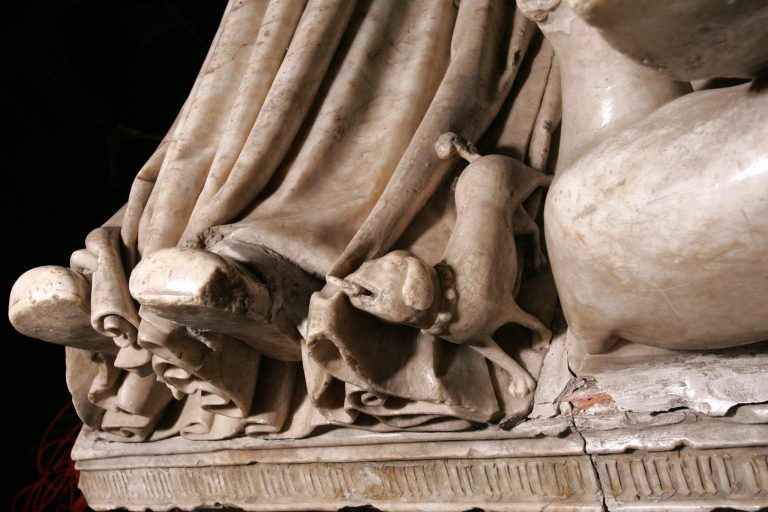 Below is the eastern end of the tomb, showing the second part of the inscription running along the rim- surprisingly for the period, this is in English. Sadly the plaque has been removed and damage to the tomb caused by the collapse of the archway above is also evident. 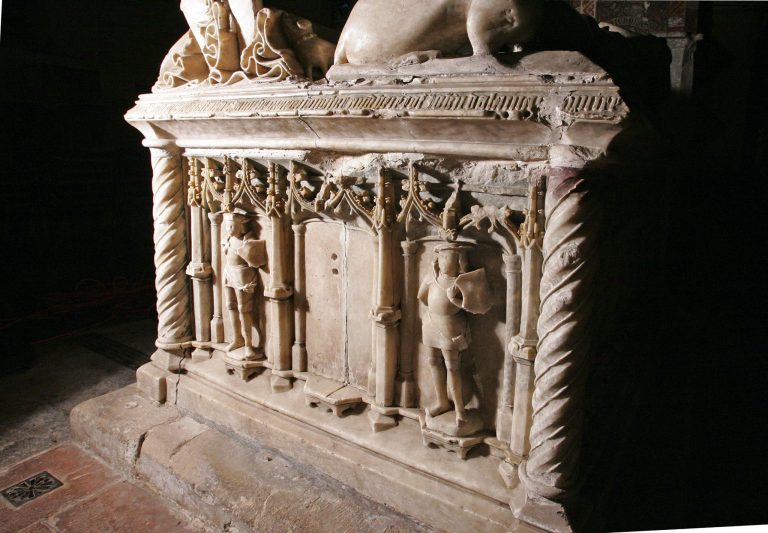 There follows a side view from the main body of the church: the inscription runs along all four sides and, in period English apart from the Latin date, reads:Here lyeth Sir George forster knight son and heyre of humfray forster esquire coson and one of the heares of Syt Stephen popham knight and Elizabeth wif of the same Sir George daughtur and heire of Thomas dalamare knight which Elizabeth dyed the vii day of December in the yere of our lord god MCCCCCXXVI and which sir George dyed in the year of our lord…   the inscription is not finished. Lady Elizabeth died in 1526 and Sir George in 1533.

Around three sides of the tomb is a total of 19 figures, which may be professional “weepers”, or just possibly the couple’s children- they reputedly had 11 sons and 8 daughters and if the figure in 25 below is their eldest son, this could add up. The 8 figures on this side are all male. 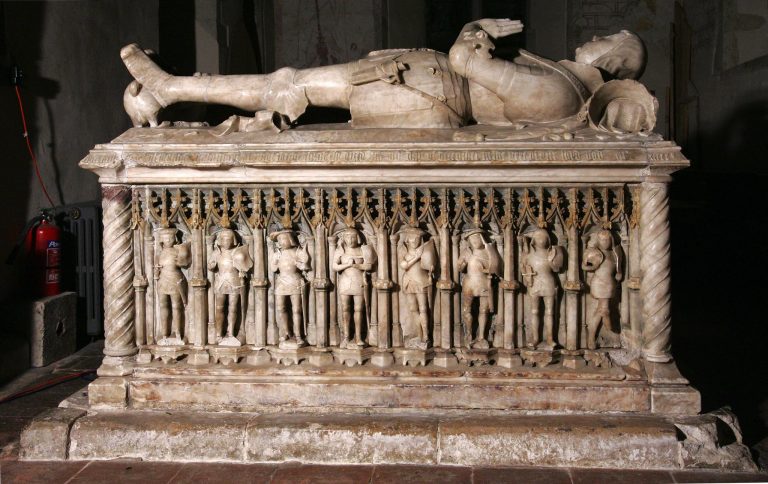 “B” on the first photo: Sir George’s feet rest upon a live buck or stag (any antlers have been broken). Other damage is evident. 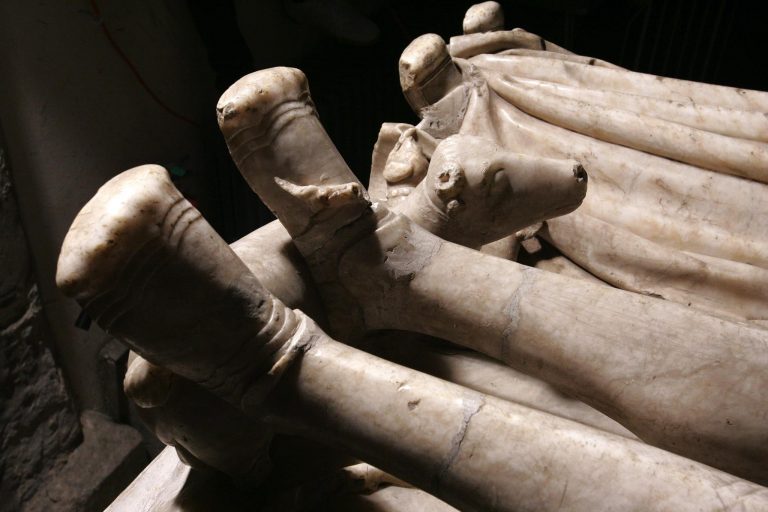 “C” in the first photo: An angel nestles between the couples’ pillows. More of the exquisite detailing is evident from this viewpoint. 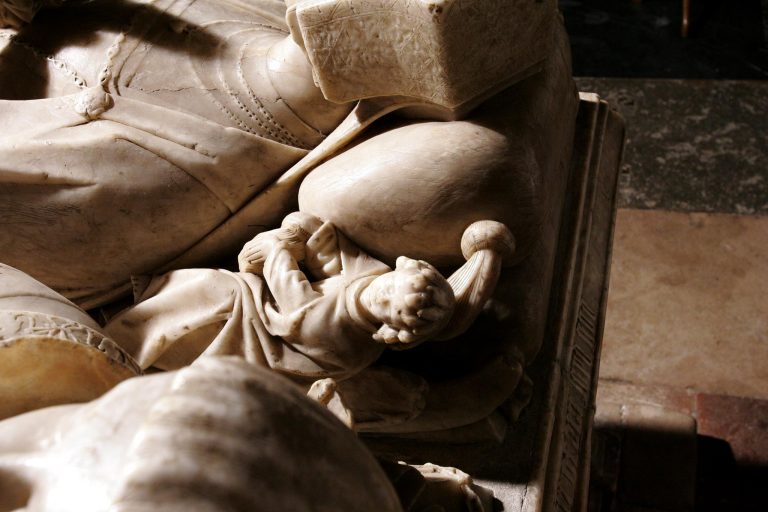 Next is the western end of the tomb. The figures in the panel have been held to be of Sir George’s eldest son, Sir Humphrey, and his wife. This last part of the inscription has been executed clumsily compared with the other three sides and has never been competed. 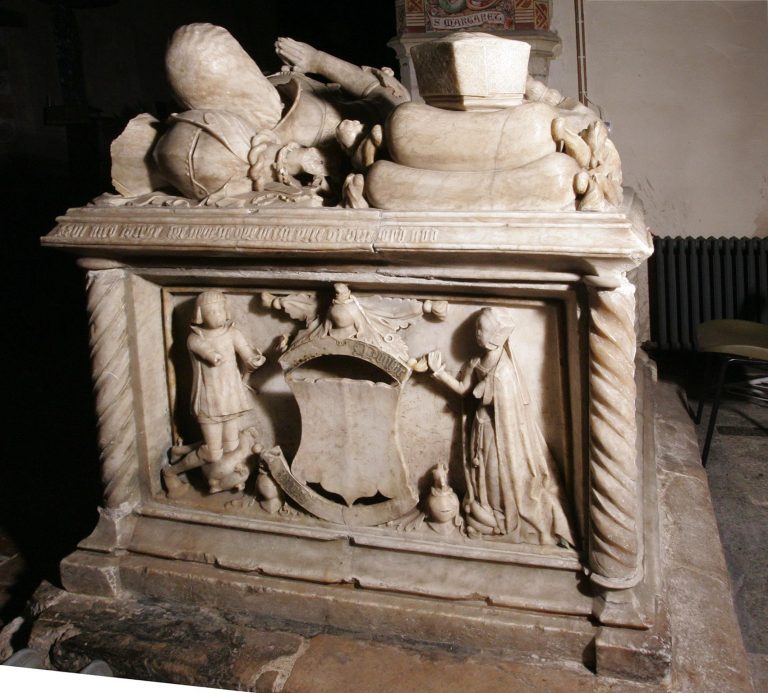 Below is a view of the tomb from the other side, from the Lady’s Chapel. All the figures on this side (one now missing) are female. The inscription along all four sides (shown in blue above) starts on the left by Lady Elizabeth’s head. 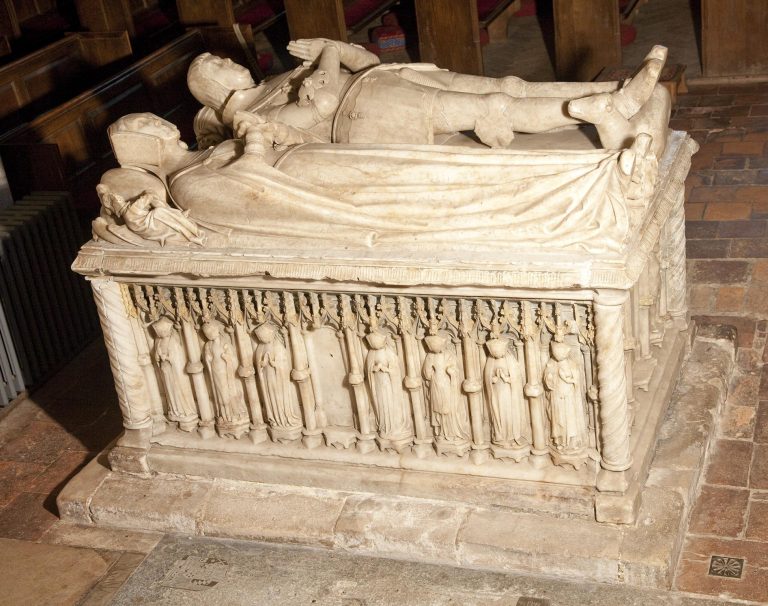 In addition, when Sir George was laid to rest in their magnificent tomb in 1533, his helmet was mounted on rafters above the tomb, where it remains to this day. 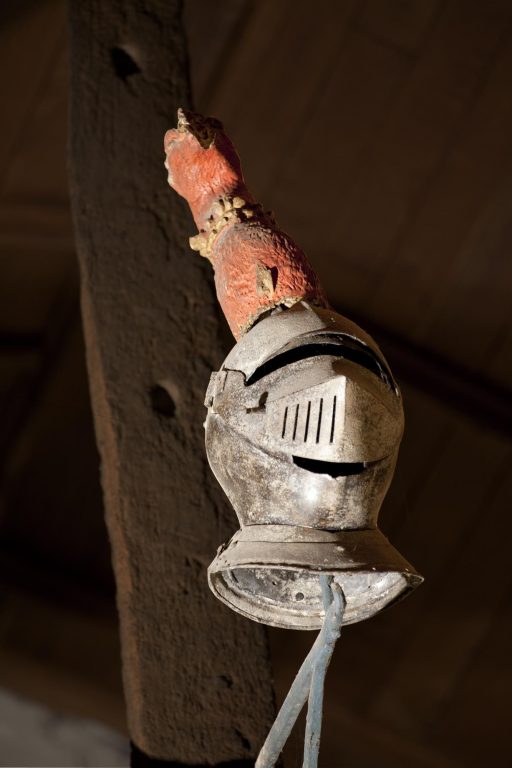 Below is a second view of his helmet. 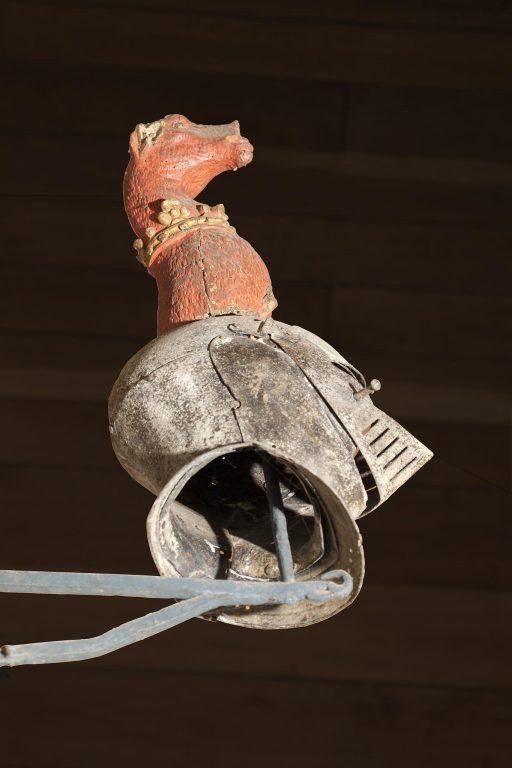 Finally, among the countless activities which surround the tomb is Aldermaston’s York Nativity Play. In this photo taken during a 2005 rehearsal, a richly-costumed king approaches his two fellows to join forces in their search for the new-born baby Jesus. Perhaps a fitting backdrop to the noble profile of Sir George’s effigy. 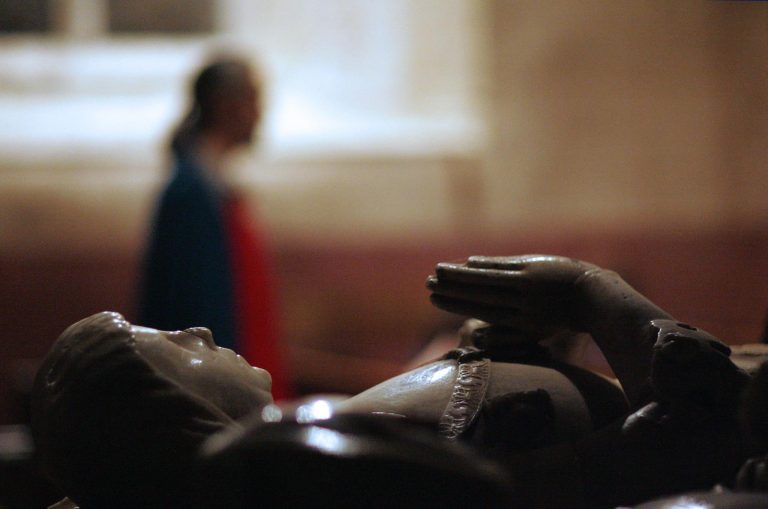