In 2018, Bruce Jackson enquired of the Heritage Officer at the Scouts HQ about the history of Aldermaston Scouts. Bruce had set up the 1st Aldermaston Scouts in 2013 and had acquired the old postcard above. Bruce was sent 3 pages from Headquarters Gazette form 1910 to 1912 and also a picture of Sidney Jacob that celebrated his award of the Medal of Merit.

Aldermaston at the start of Scouting

Scouting traces its begins from 24th January 1908 when the Boer War hero, Robert Baden-Powell, published the first instalment of his book Scouting for Boys. It is clear that this inspired people in Aldermaston to set up the Aldermaston Troop over the next year. 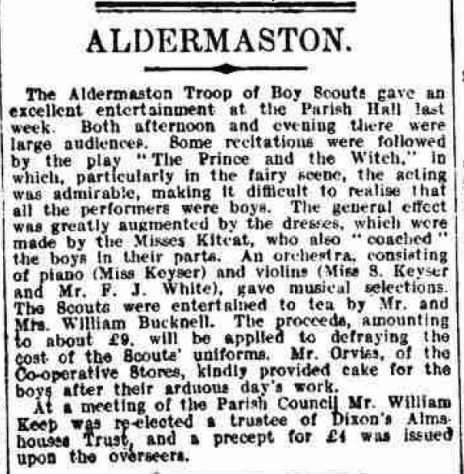 The Aldermaston Troop of Boy Scouts gave an excellent entertainment at the Parish Hall last week. Both afternoon and evening there were large audiences. Some recitations were followed by the play “The Prince and the Witch”, in which, particularly in the fairy scene, the acting was admirable, making it difficult to realise that all performers were boys. The general effect was greatly augmented by the dresses, which were made by Misses Kitcat, who also “coached” the boys in their parts. An orchestra, consisting of piano (Miss Keyser) and violins (Miss S. Keyser and Mr F.J. White), gave musical selections. The Scouts were entertained to tea by Mr. and Mrs. William Bucknall. The proceeds, amounting to about £9, will be applied to defraying the cost of Scouts’ uniforrms. Mr. Orviss, of the Co-operative Stores, kindly provided cake for the boys after their arduous day’s work.

The paragraph about the Scout Troop is clearly by the same author as the article above, but less edited, the additional text is highlighted. Most interestingly is that the phorograph at the top of this page is likely to have been one of those on sale taken by Mr P Robert.

ENTERTAINMENT.—The Aldermaston troop of Boy Scouts gave an excellent entertainment at the Parish Hall on Tuesday, August 3rd. Afternoon and evening performances were given, and at both there were large and appreciative audiences. Some recitations wore first given, and these were followed by the play, “The Prince and the Witch,” in which, particularly in the fairy scene, the acting was admirable, making it difficult to realise that all the performers were boys, and the general effect was greatly augmented by the dresses, which were made by the Misses Kitcat, who also “coached” the boys in their parts. An orchestra. consisting of piano (Miss Keyser) and violins (Miss S. Keyser and Mr P. J. White) gave suitable musical selections. The hall was nicely decorated by willing helpers, and the Scouts were entertained to tea by Mr and Mrs. W. Bucknell. Photographic groups of the Scouts (taken by Mr P. Robert) were on sale, as well as various articles made by the boys. The proceeds amounted to about £9, and these will be applied to defraying the cost of the Scouts’ uniforms. Mr Orviss, of the Co-operative Stores, kindly provided cake for the boys after their arduous day’s work, and to him, as well as to all the other helpers, the thanks of the promoters are due.

In the bottom right of this page is a section entitled “Newbury District (Half Year Report)” and beneath the phrase “The following have charge of Boy Scouts in the District:” is 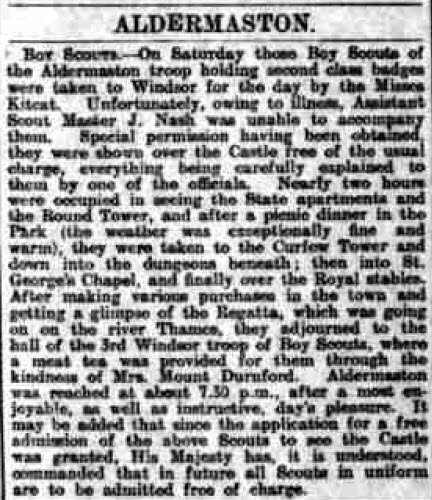 The above article was extracted from page 8 of the edition. The transcript reads:

ALDERMASTON.
BOY SCOUTS – On Saturday those Boy Scouts of
the Aldermaston troop holding second class badges were taken to Windsor for the day by the Misses Kitcat. Unfortunately, owing to illness. Assistant Scout Master J. Nash was unable to accompany them. Special permission having been obtained they were shown over the Castle free of the usual charge, everything being carefully explained to them by one of the officials. Nearly two hours were occupied in seeing the State apartments and the Round Tower, and after a picnic dinner in the Park (the weather was exceptionally fine and warm), they were taken to the Curfew Tower and down into the dungeons beneath; then into St. George’s Chapel, and finally over the Royal stables. After making various purchases in the town and getting a glimpse of the Regatta. which was going on on the river Thames, they adjourned to the hall of the 3rd Windsor troop off Boy Scouts, where a meat tea was provided for them through the kindness of Mrs. Mount Durnford. Aldermaston was reached at about 7.30 p.m., after a most enjoyable, as well as instructive, day’s pleasure. It may be added that since the application for a free admission of the above Scouts to see the Castle was granted. His Majesty has, it is understood, commanded that in future all Scouts in uniform are to be admitted free of charge.

This hero of Aldermaston was lost 5 years later as a fatality of the Great War. In 2015 David Whithorn, when researching for the Centenary Plaque, created the story of the military careers of Sidney Ralph Jacob and his elder brother Frederick James Jacob, he also died in 1917 although he was in a different regiment.

Robert Baden Powell, the first Chief Scout and founder of the Scout movement, was married on 30th october 1912 to Olave St Clair Soames. This list has the following:

In old pre-decimal currency this was 4 shillings and 5 pence, expressed in todays money 22p,   but it’s value would be equivalent to £17.30.