You are here: HomenextPlacesnextSt Mary the Virgin ChurchnextHeraldry in Aldermaston Church: by Mike Wall, 2007

In May 2007, Mr Mike Wall kindly gave a talk on the heraldry in Aldermaston’s church. Mr Wall has sadly passed away but his widow Beatrice kindly gave permission on 25.8.2019 for his work to be published in this way. His notes have been abridged here to fit them to the photos and only single examples are discussed below. However, his notes are published in full under Heraldry: Mike Wall on this website. This first photo is labelled to identify items illustrated in more detail in the photos which follow below.

Also, a rich source of families’ coats of arms in the neighbouring Manor House can be found by clicking on:

To magnify the images, please scroll down to where the image is repeated and click on the plus sign. 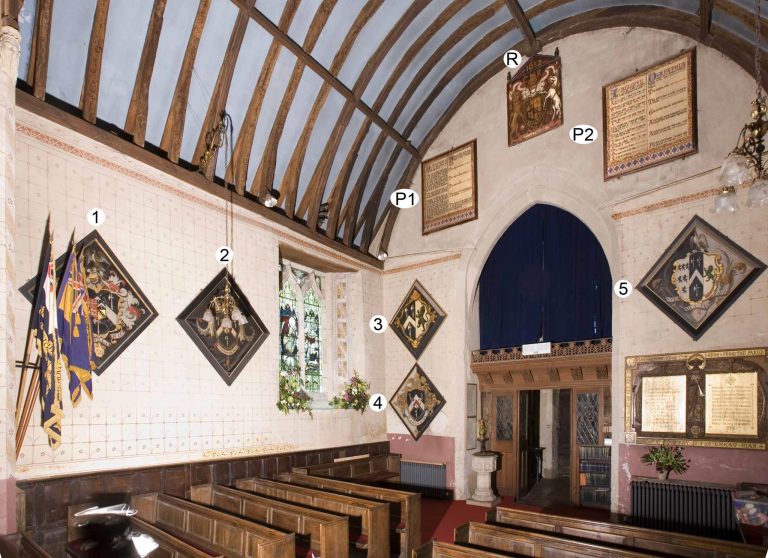 The item marked “R”, right up under the roof and therefore hard to see, is illustrated in the next photo. In those times, churches often displayed the Royal Arms and this shield dated 1632 relates to Charles 1. Mr Wall’s comments: “typical of the Stuart period, Quarterly 1 &4, i & iv France, ii & iii England, 2 Scotland, 3 Ireland. The mottoes for these nations are the same as today (and of course the English kings had claims on the French throne!) 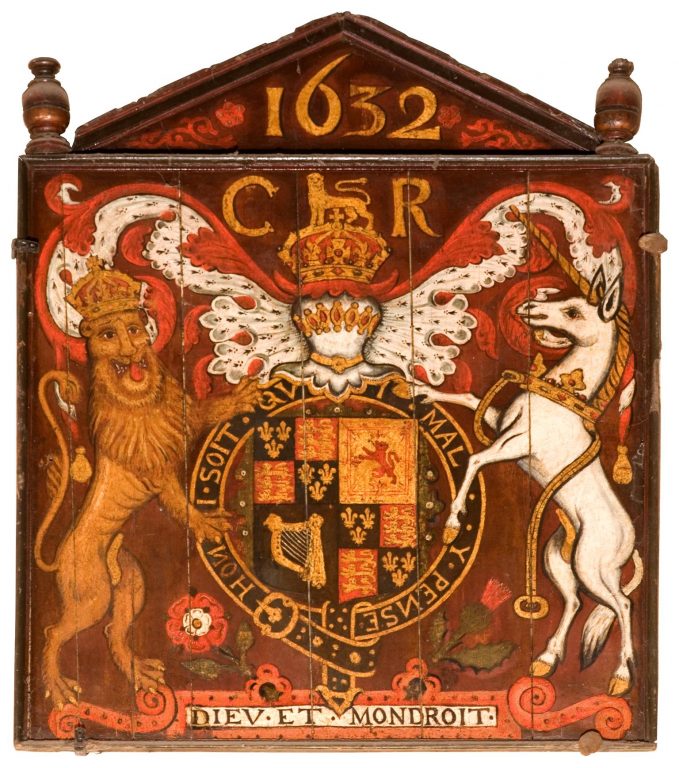 A total of 5 Hatchments is displayed around the walls. When a prominent person died, their family Coat of Arms was displayed outside their residence- and were then often lodged in their church. For example the Hatchment numbered 5 shown below drew these comments from Mr Wall: “For the Rev. Richard Congreve who married firstly Elizabeth daughter of Thomas Savage, secondly Martha daughter of John Jones. Elizabeth occupies the left third of the shield, Martha the right third. The left (“dexter”)  half is black, indicating that Martha is now left a widow.” 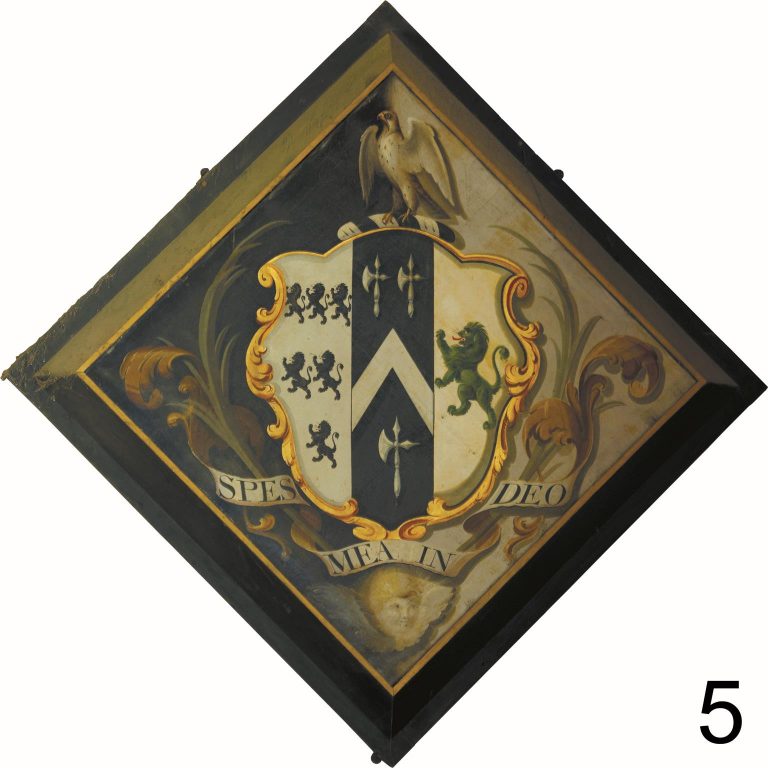 The shields in one of the north windows are numbered 1 to 8 in the next photo. Taking number 1: “Blazon quartering Delamere, Achard and Popham. Popham’s is Argent in a chief Gules two stag’s heads caboshed (i.e. with heads severed above the neck). The small crescent within the Forster chevron shows the second son became heir, presumably on the death of his elder brother.

In window number 2 can be seen further gory details, namely three birds’ legs “erased a la quise” meaning cut off at the thigh. To those who can interpret, this image also shows that at some time a Sandys was lucky enough to marry a Bray lady who was an heiress!

This window alone demonstrates the incredible amount of family information which heraldic symbolism could convey. 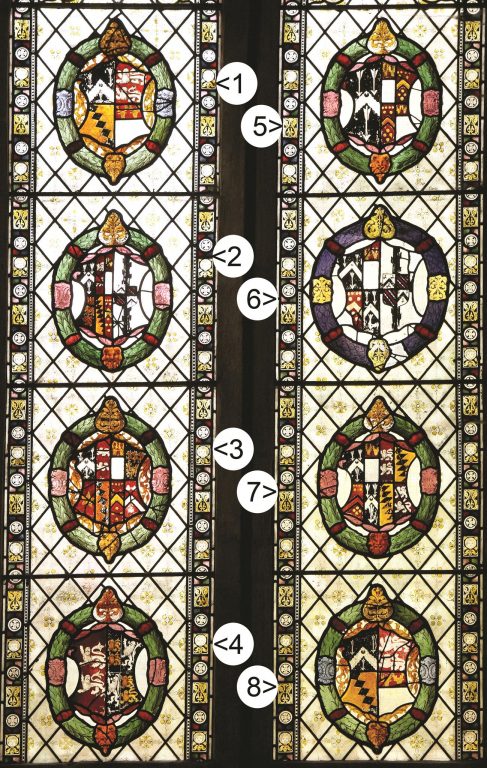 The coats of arms of Aldermaston’s prominent families can be seen in a window in the Lady’s Chapel- shown in the next two photos.

To the right, at the top the Keyser family. Charles Keyser undoubtedly left more of a mark on Aldermaston than any other Lord of the Manor. His motif is dominated by a palm tree; perhaps he had spent time in the Middle East? He also had himself portrayed as a harpist to the right of the altar- and his family on the opposite side- both photos are also on this website, under The Lords of the Manor of Aldermaston. Then beneath to the left, Bagnall and to the right Blore. 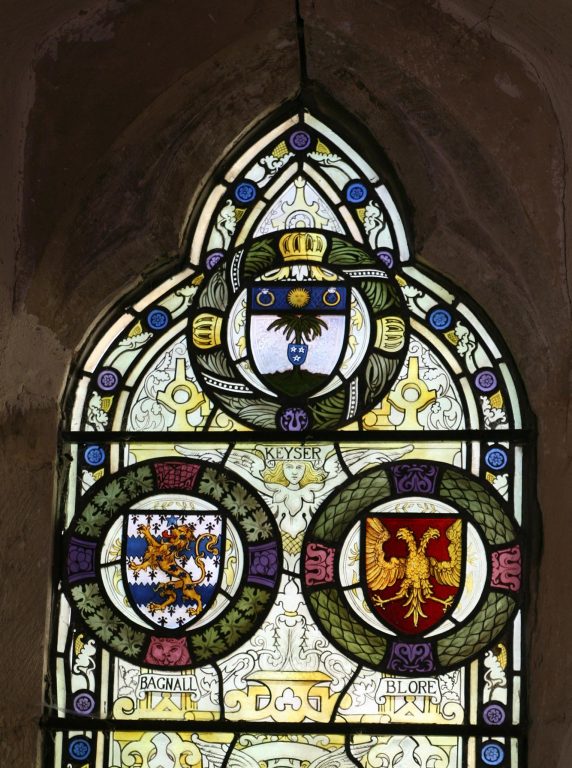 The next photo is actually the bottom half of the last one. Top left is Higford Burr (lions on black), who built the latest in a line of three, possibly four Manor Houses in 1867. He also appears in a window, portrayed as Adam naming the animals- he was an animal lover! To the right are Congreve (battleaxes) and Stawell (lozenges) and below Delamare (lions on red), Forster (arrows) and Achard (lozenges on gold). 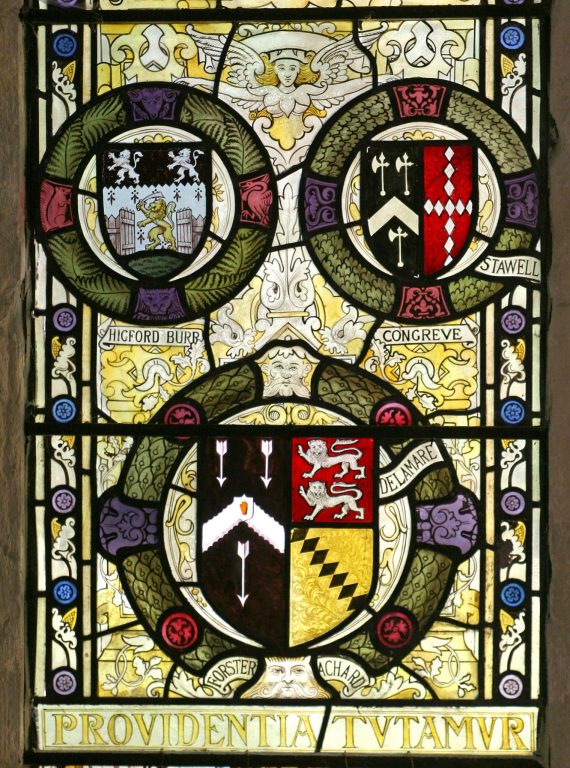 Apart from the Keyser family which only became involved in 1893, most of the other motifs can be found in the 8-part window above.